The Carmen de Hastingae Proelio “Song of the Battle of Hastings” is a poem of approximately eight-hundred lines that survives in a single incomplete manuscript. Its authorship is attributed to Guy, Bishop of Amiens, who was an intimate of William’s court and related by blood or marriage to all the principals of the English succession. Orderic Vitalis speaks of him as composing a poem on the Battle of Hastings, “abusing and condemning Harold but praising and exalting William,” which he is said to have completed by the time he accompanied Matilda, the Conqueror’s wife, to England for her coronation as queen in May The sympathetic treatment of Eustace, Count of Boulogne, who had become estranged from William soon after the conquest, argues for an even earler date.

If the poem is a reminder of his loyal service at Hastings, the Carmen could have been written by Marchno more than six months after the battle, before Eustace attempted to invade Kent and fell from favor. Though both may share a common oral tradition, it is intriguing to see how William of Poitiers, when he presents the same material, invariably exaggerates or alters events in favor of Duke William.

If William loses two horses in battle, William of Poitiers has him lose three; Harold has five hundred ships to blockade the Norman retreat, William says seven hundred. Even when the Carmen speaks of the feigned flight during the battle, in which the French pretended retreat and then turned on the pursuing English and slaughtered them, William of Poitiers has the stratagem repeated three times, this time by the Normans. Were the Carmen to have depended upon William of Poitiers, instead of otherwise, it is unlikely that Guy would have minimized the duke’s conquest, especially since he professes “to preserve the memory of his achievement throughout the ages.

As a result, most Anglo-Norman accounts derive from William of Poitiers.

The Carmen de Hastingae Proelio of Guy Bishop of Amiens

Nor is Guy always politic in his cqrmen about Duke William, who is characterized as suffering from joyful expectation and then tearful despair as he waits in port for the weathercock to indicate a southerly wind. Momentarily confounded when he loses one, then another, horse in battle, William is obliged to accept Count Eustace’s own mount. He also calls upon him, and others, for aid in slaying the redoubtable Harold.

The Carmen is the only source to explain how Harold got possession of Battle Hill ahstingae, a tactical advantage that William might have been expected to command. Only that morning, when his envoy returned to camp, did William learn of the king’s intention to take him by surprise on land and sea.

Both leaders, in fact, seem to have been obliged to change their strategy in response to the other, and each rushed to occupy the hill. There was a hill near the forest and a neighbouring valley and the ground was untilled because of its roughness. 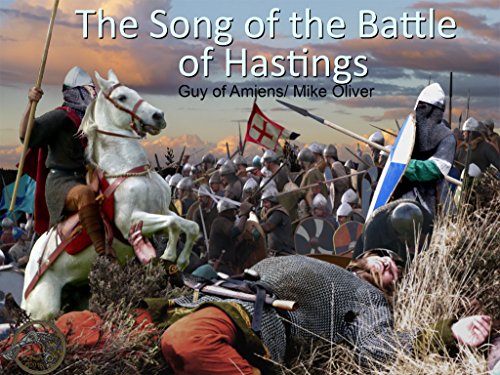 Coming on in massed order–the English custom–they seized possession of this place for the battle. The English dismount, leaving their horses in the rear, and brace themselves for the attack. It is here that the Carmen introduces the figure of Taillefer, the only eleventh-century source to mention him, who gives heart to the disconcerted Normans. A jongleurhe rides out in front of the line, tossing his haastingae in the air and juggling it until an Englishman is provoked into confronting him and is killed.

The battle begins as the Norman archers release their arrows, including bolts from crossbows. But the English stand firm and. The French, who “versed in stratagems, skilled in warfare,” feign flight, drawing the English peasants after them and cutting them down, while the Normans flee in panic. The Normans fled, their shields convered their backs! The Duke reveals himself to his men and entreats them to stand and fight. It is then that William, his horse lost from under him, kills Gyrth, the king’s brother.

Another horse is seized but it, too, is killed and William fights on foot until Eustace, the leader of the French, comes to his rescue and offers William his own horse, taking another for himself. As a waning wood falls to the stroke of the axe, so the forest of English-men was brought to nothing.

Finally, the king, himself, is sighted and, perhaps already blinded by the arrow depicted in the Bayeux ;roelio, hacked to death. Later, Harold’s mother entreats William for the body of her mutilated son and offers to ransom its weight in gold. But William refuses and, in a remarkable re-enactment of pagan rite, commands that the dismembered corpse be wrapped in purple linen and buried on the summit of a cliff, there to rest carmeen guardian over sea and shore.

Likely commissioned by Queen Edith”the illustrious mistress whom we chiefly serve in this present account,” to justify her family’s succession of the throne, the manuscript consists of two parts. The first recounts the deeds of her family, her husband the king, her father Earl Godwin, and her brothers Harold and Tostig. It ends with the death of the king and probably was written about the same time latethere being no point in writing it after William had secured the throne.

For the author of the Vitathe quarrel between Harold and Tostig was fatal to the Godwin family and the country, itself.